The Central Library is closed this week, but we’re giving you a sneak peek inside.

We are right in the middle of the Central Library’s historic $115 million renovation.  Starting February 20, you’ll start getting a look at the work that’s happened when the 2nd and 3rd floors open. 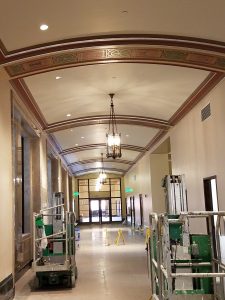 Several public service departments that are currently on the first floor will move to the second and third floors.  Here are a few pictures of the second floor to give you a preview.  New light fixtures line the 2nd floor hallway.  The paintings on the ceiling have been restored.  At the end of the hallway, you’ll see a large glass wall with a door.  That’s where the new Teen Wing will start in 2019, giving young adults their own space.  That space will temporarily house the Children’s Department as downstairs is now under renovation. 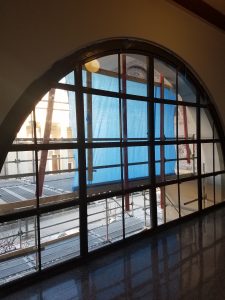 Scaffolding remains up outside the front window.  This area on the 2nd floor will provide places for people to plug in their laptops or work on tablets.  The Poe Room and Wheeler auditorium are still under renovation. 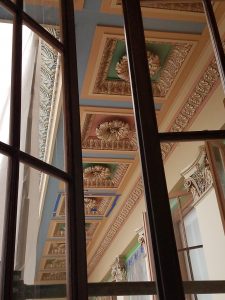 Here’s a peek at the rosettes in the ceiling of Central Hall.  Plaster workers have painstakingly restored them, so they look like the day they were created.

Starting February 20, many departments will have shifted around.  Don’t hesitate to ask a staff members to point you in the right direction.