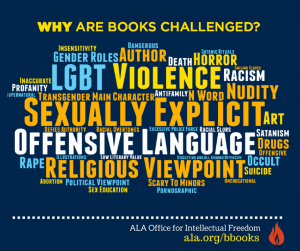 Have you ever read a book simply because someone forbade you from reading it? My hometown library system in New York issued different cards according to age; the children’s card could only be used in the children’s department. Luckily, my mother let me use her “adult” card to check out any book, no questions asked. This was how I read way too many of Stephen King’s books before turning thirteen. More importantly, this also instilled a sense of inquisitiveness and a love of research and reading, characteristics I’ve carried into adulthood.

From September 24th through October 1st, 2017, libraries across the country celebrate freedom from restricted reading. Banned Books Week has been around since 1982, but books have faced denouncement decades before this event began.

When we think of “banned” books, we may picture a parent or community member requesting that a library remove a certain book for profanity, violence, or sexual content. Sometimes, individuals or organizations object to institutions carrying materials they find offensive. They may make their objections known to library staff, or create larger campaigns to publicly denounce these materials. 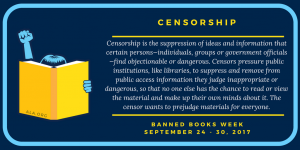 However, censorship of ideas through banning books (and the act of reading itself) has long been used as a tool of oppression, asserting control by denying others the freedom to read without restriction. In 1974, an administrator at a Wisconsin public school defended his decision to ban Bury My Heart at Wounded Knee, which discusses the decimation of Native American tribes in the late 19th century, by stating, “If there’s a possibility that something might be controversial, then why not eliminate it?” Banned Books Week not only encourages the freedom to read, but celebrates reading as rebellion from a dominant story.

In recent years, the books showcased on banned book lists have been challenged for removal, but often remain on the library’s shelves. The American Library Association’s Office of Intellectual Freedom tracks these challenges and identifies the titles that are most frequently included. While the number of challenges has decreased over the years, many of the same titles continue to face scrutiny every year. 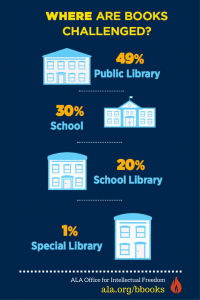 How do libraries decide if a controversial book should be added — or remain in — their collection? Many libraries develop policies guiding the types of materials they keep on their shelves. You can read our materials selection policy, How Baltimore Chooses, for more information on how our librarians determine which books to purchase.

What’s your favorite book that’s faced a challenge? Looking for recommendations on what books to read during Banned Books Week? Check out this list of frequently challenged books, and let us know your thoughts and questions in a tweet or commenting on the Facebook thread.